The famous Red Lotus Sea (known as the Talay Bua Daeng by Thais) is just five minutes away from Green Gecko. We will be happy to take you there and to help you arrange an excursion by boat on the red lotus lake.

Watch this video to soar above the lake and to get an idea of what is in store. Despite its name, the lotus flowers on the lake are in fact a dramatic pink, rather than red.

About the Red Lotus Lake and its Legend

The Red Lotus Sea is located at Nong Han lake in Kumphawapi district in Udon Thani province. The lake comprises listed wetlands of approximately four square kilometres, and is best visited by boat, as the beautiful lotus flowers and their floating leaves are often almost invisible to those standing on the shores of the lake, obstructed by the tall grasses on its perimeter. Boats may be hired by the hour to glide out into the peaceful, colourful waters from the small village of Ban Diam.

The lake has been named by CNN as the world's second strangest, but its renown stretches way back into Thai folklore. The story is told of the beautiful princess Nang Ai and a string of suitors including Prince Pangkhii. Her father, King Kom, had organized a rocket festival to determine who would marry her, yet had to abandon his plans when things to not proceed as he had hoped. It is said that Prince Pangkhii used his extraordinary powers to transmogrify into a white squirrel, intending covertly to keep tabs on the princess, but she spied him and had him killed by one of her huntsmen, and the squirrel's flesh was later devoured by the locals. It was also believed that a huge snake spirit named Phaya Nak ruled the waters and, as father of the squirrel, swore vengeance on those who ate of the flesh, promising to kill all who did so.  In addition, he promptly turned the former hunting grounds into a massive swamp. To this very day the locals, who are keen hunters, continue to hunt and eat almost anything that walks or swims, but with the notable exception of the white squirrel, for fear of being smitten by the spirit...

Places to Stay Near the Red Lotus Lake

The lotus flowers bloom early, and as a result the experience of visiting the lake will be most memorable when done in the morning. If you plan to visit the lake in a day trip from Udon Thani town itself, do bear in mind that driving to the lake will take you around 40-50 minutes from the airport, or indeed from any hotel or resort in the city of Udon Thani. As such, a day trip will involve either a very early morning flight, or waking before dawn in your Udon Thani hotel.

Green Gecko however is just five minutes from the lake, as is our sister property Gecko Villa, so you can wake at leisure and enjoy an unrushed trip when the lotus sea is at its best. Both villas provide free transport to the boat pier, and we will help you secure the boat of your choice - a covered, larger boat for groups, or a more romantic (if less stable) wooden long tail boat.

Unfortunately the nearby Flame Tree Villa has now closed its doors for good, and the only other options are a couple of very simple homestays or motel rooms where bookings are not always easy.

When to visit the Red Lotus Sea

The lake can be visited year round, but only a visit in the cooler season will really pay it justice. We strongly recommend visiting between November and March, and would encourage you to plan an early morning boat ride to view the dense lotus flowers in full, majestic bloom.

If you are using Google maps, a Garmin or your smartphone to drive to the boat pier yourself, then simply plug in the following latitude and longitude details for the lake: 17.212328, 103.034303

Parking and Eating at the Red Lotus Lake

There is a car park adjacent to the lake and Wat Mahatat Thep Chinda temple.

Either before or after your boat trip, you can drop into one of the simple hut-like restaurants, coffee-shops and stalls near the car park. Wake up with an iced coffee, enjoy a quick bowl of noodles, or a made to order plate of curry on rice. Or buy a bag of fresh strawberries to munch upon... 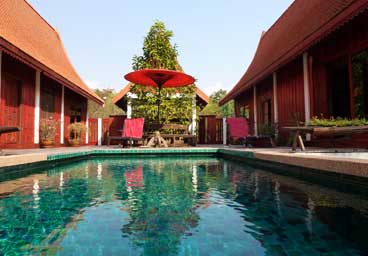 Enjoy this private pool villa and take advantage of a free five minute drive to the Red Lotus Sea. 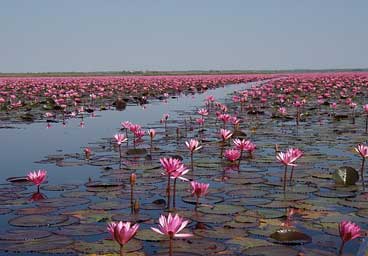 Pay a virtual visit to this lotus lake accommodation 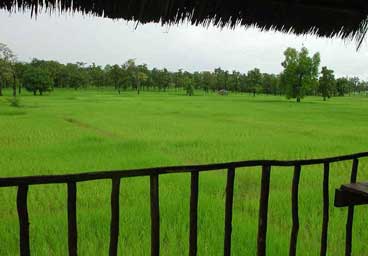 Reserve the villa now and let us know when you would like to visit the Red Lotus Sea.